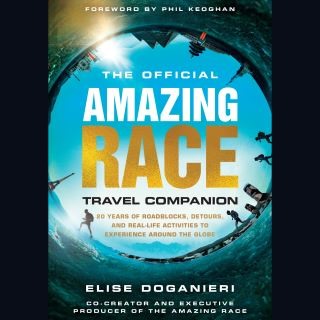 More Than 20 Years of Roadblocks, Detours, and Real-Life Activities to Experience Around the Globe

Discover unique destinations and take your vacation plans to the next level with these travel ideas from the official companion to the blockbuster reality show, The Amazing Race.

For more than twenty years, The Amazing Race has introduced viewers to unique travel destinations in ninety-two countries across the globe. Pairing challenges with cultural touchpoints of the locations visited, The Amazing Race averages 10 million viewers per season.

This fanbook-meets-travel guide will cover six continents and thirty-two countries, including activities and places to visit at each destination. In addition to region-specific recommendations of destinations and activities from the show’s history, The Official Amazing Race Travel Companion will feature:

-A never-before-seen “behind the scenes” snapshot of how the show is made, who they hire, and how destinations are chosen
-An introduction by Elise Doganieri and Bertram van Munster, cocreators of The Amazing Race
-A foreword by host Phil Keoghan
-And many more fun surprises!

Perfect for the fan or avid traveler in your life, The Official Amazing Race Travel Companion will satisfy any craving for adventure while traveling!